French-American artist Louise Bourgeois (1911–2010), one of the most prominent and influential artists of the 20th century, left behind a body of work rare in its material diversity and emotional intensity, created over nearly seven decades. She produced a rich symbolic and figurative language, transposing the human body with architecture, animals, objects, and plants. All of Bourgeois’s images and forms articulate a range of universal human emotions, including desire, anxiety, loneliness, pain, and anger.

In 1982, Deborah Wye curated Bourgeois’s first retrospective at the Museum of Modern Art, New York. A first retrospective in Europe, at Frankfurter Kunstverein, Germany, followed in 1989. Since then, large-scale solo exhibitions of her work have been staged in numerous museums the world over, and she participated in major international art events, including Documenta in Kassel (1992, 2002) and the Venice Biennale (1993, 1999), where she was awarded the Golden Lion for a living master of contemporary art. In 2000, at the onset of the new millennium, Bourgeois’s site-specific installation I Do, I Undo, I Redo was created as a special commission for the Turbine Hall. This monumental work, along with her 30-foot spider sculpture, Maman (1999), inaugurated the opening of Tate Modern, London.

The exhibition at Gordon Gallery focuses on Bourgeois’s prints, mainly those created in the last decade of her life. They reveal, for the first time in Israel, the umbilical, Gordian knot between Bourgeois’s art and the medium of print. The title of the exhibition, “Pink Days / Blue Days,” is taken from a sculpture of the same name, created in 1997: variously-sized garments from Bourgeois’s wardrobe hang off of hangers attached to the “arms” of a central steel pole, such as a pink baby gown hanging from a bone. Addressing time and memory, among other themes, the sculpture preceded Bourgeois’s use of clothes and pieces of fabric in her late prints (on view in the show), in which she often embroidered her signature. The title also alludes to the expression “pink days,” written in pink over the pages of a music notebook, which Bourgeois made in 2008. For Bourgeois, the color pink represented femininity and happiness, while blue was symbolic of melancholy and depression. Blue could also represent the sky, which in turn expressed feelings of escape and of being overwhelmed. 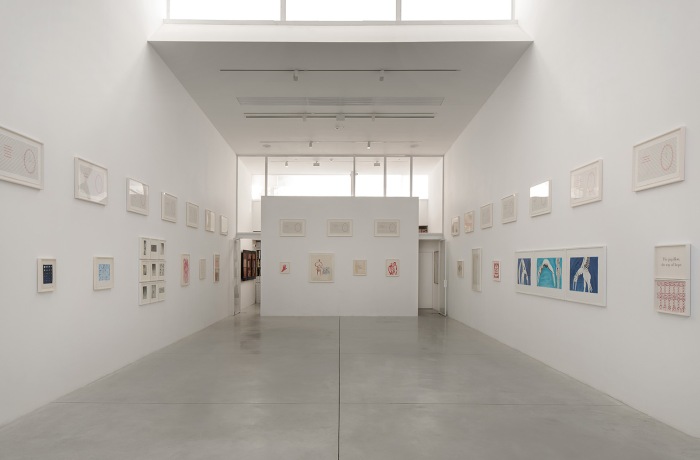 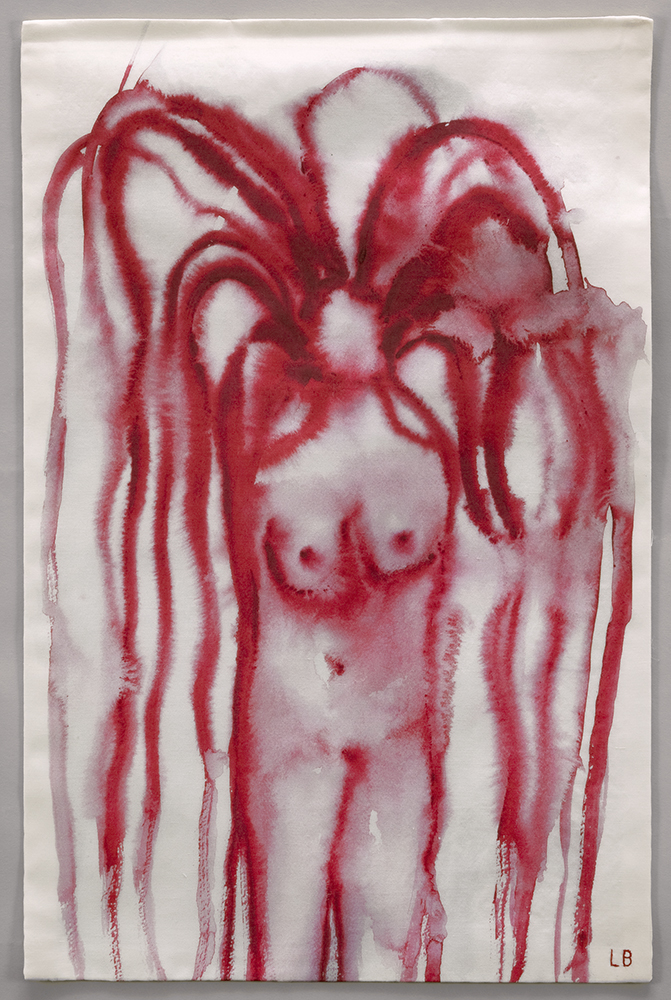 GIRL WITH HAIR, 2007 © The Easton Foundation/Licensed by VAGA, NY