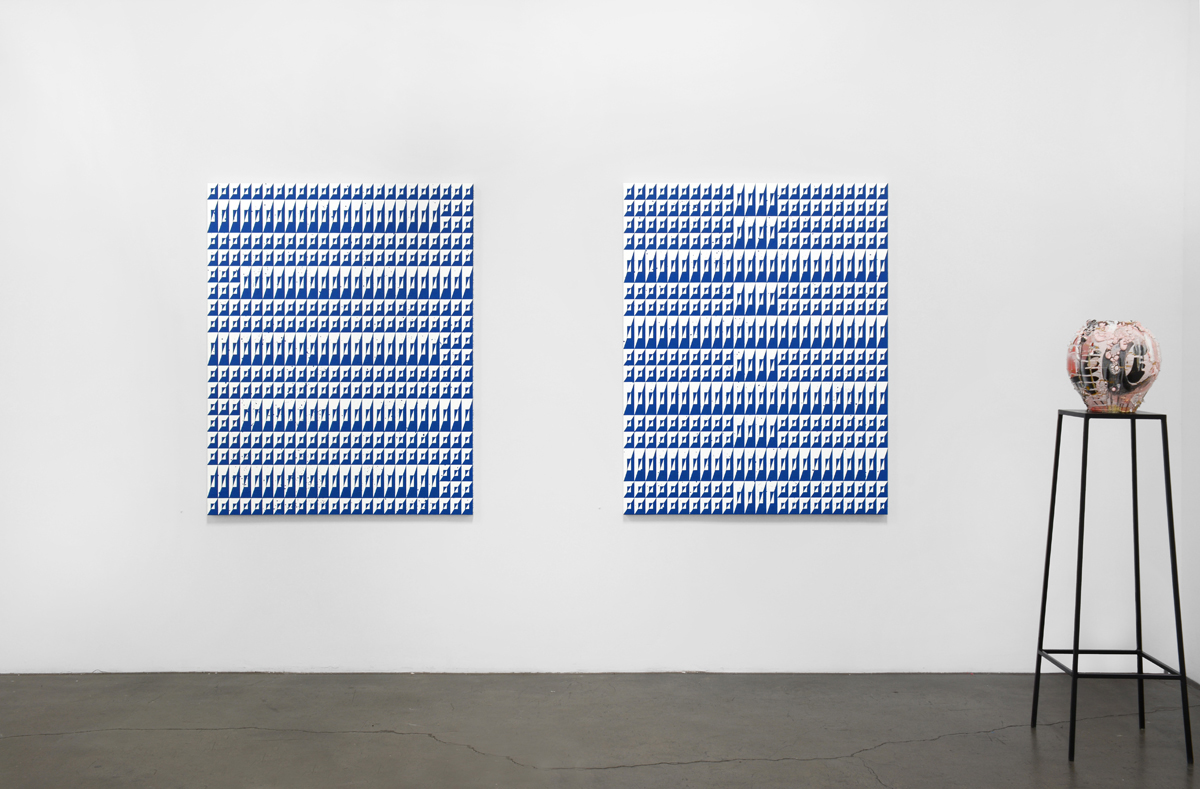 Born in 1983 in Providence, Rhode Island. Mignanelli lives and works in New York City and is a graduate of the Rhode Island School of Design.

In his works, Mignanelli’s approach to painting has evolved from subtle monochromes to a stark black / white, deep blue / white, and deep blue / black palette. While continuing to explore relationships between structure and nature, which are relayed through the use of harsh light and shadow against architectural elements, Mignanelli has been reexamining the evolving interactions amongst light and surface in these works.

The hard edge is applied over gestural strokes and drips of the background. Mignanelli allows for the hand to come through again on his surface through the use of hand­painted shapes and the imperfections the human hand creates amongst them. Chance enters into these paintings through the mode of execution; the works are all painted flat on a table. As Mignanelli moves around the work, painting in sections, the viscous enamel splashes and drips into the negative spaces. This spontaneity that emerges makes the paintings feel alive, and have allowed the works to become much more about painting itself.

The subtle variation of shapes in each painting creates areas of “disruption” within these environments. The visual breaks within the repetition of shape create a movement that forces the eye to dance.

The return to color in Mignanelli’s works has been marked by another significant change in his life, the birth of his daughter last summer. The many sleepless nights that followed changed his work. The midnight blues of the night sky, and the early morning light inspired the deep blue palette for these new works. There is a certain serenity in the palette, representing those peaceful moments when the world is still asleep.

Mignanelli’s paintings have been exhibited extensively throughout the United States and internationally with solo exhibitions at Richard Heller Gallery, Los Angeles, LUCE Gallery, Torino, and Dubner Moderne, Lausanne. He recently had a two­person exhibition at Anonymous Gallery, Mexico City (2015). His works will be included in Face to Face: Selections from the Ernesto Esposito Collection at Palazzo Fruscione, Salerno (forthcoming), and have been exhibited in Linear Abstraction at the SCAD Museum of Art, Savanna (2015), Ameringer, McEnery, and Yohe (2015), Dickinson Roundell (2015), Contemporary Istanbul (2015), EXPO Chicago with Richard Heller Gallery (2015), Regina 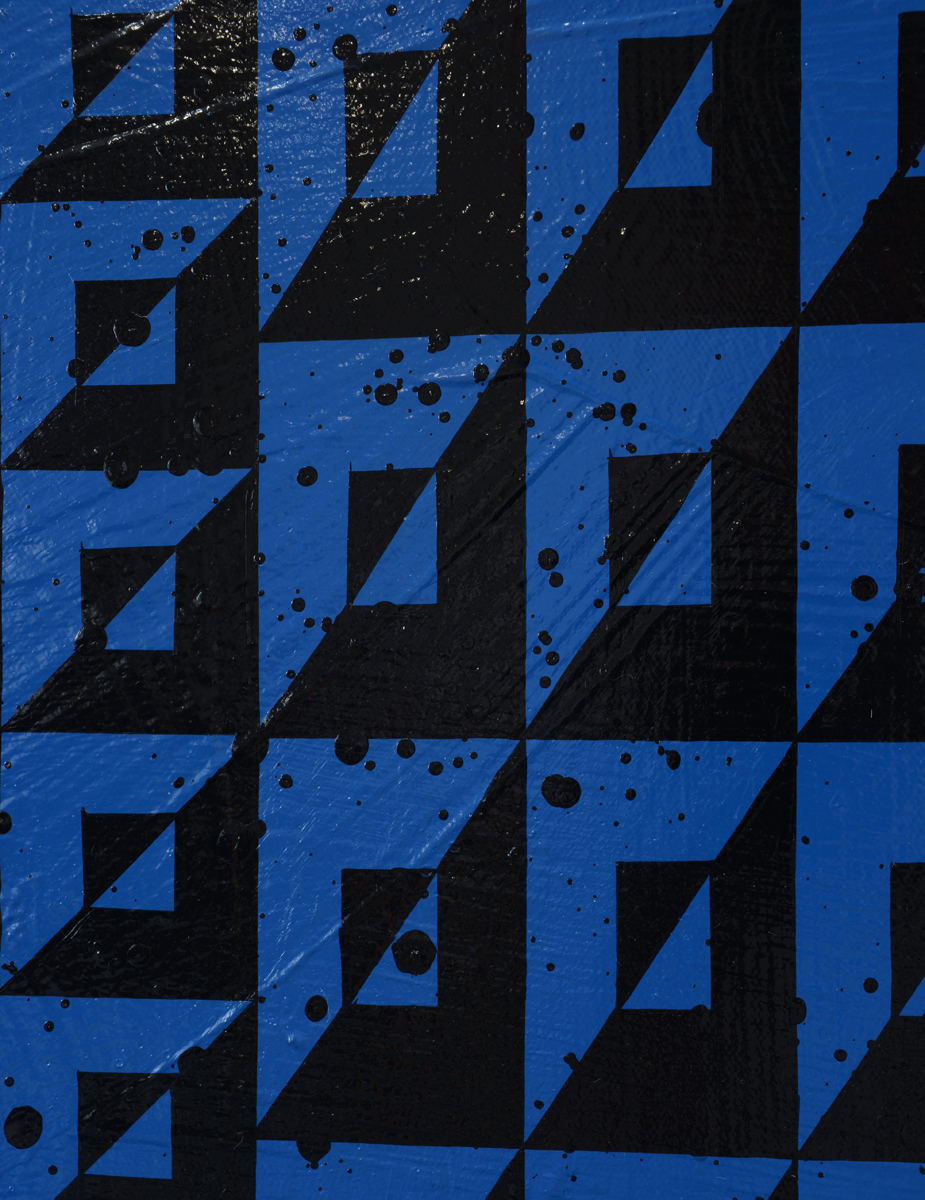 Born and raised in Rhode Island. Lives and works in Los Angeles, California. Rochefort received his BFA in Ceramics at the Rhode Island School of Design in 2007. He was awarded the Lillian Fellowship from the Archie Bray Foundation for the Ceramic Arts in Helena, Montana 2007/­2009.

Rochefort is a mixed media sculptor working in ceramics, glaze (on vessels) and automotive paint (on sculpture).

Rochefort’s vessels, ceramic “paintings” and sculptures flaunt the anxious and risky mindset of disorder and chaos in the face of the viewer, reminding us that the Horror Vacui exists. His works are homages to both AbEx and contemporary painting, he builds layers slowly and uses multiple firings in his quest for texture.

The seductive messes and goo that spread out in our lives, regardless of our attempts to contain them, are the insistent presence at the forefront of the work. Freezing untidy, mucky moments, the works scream at us to pay attention to their nauseous ornament, throwing up our most base fun­house selves, celebrating the pleasure, beauty and horror of the entirety of what is worldly and human. 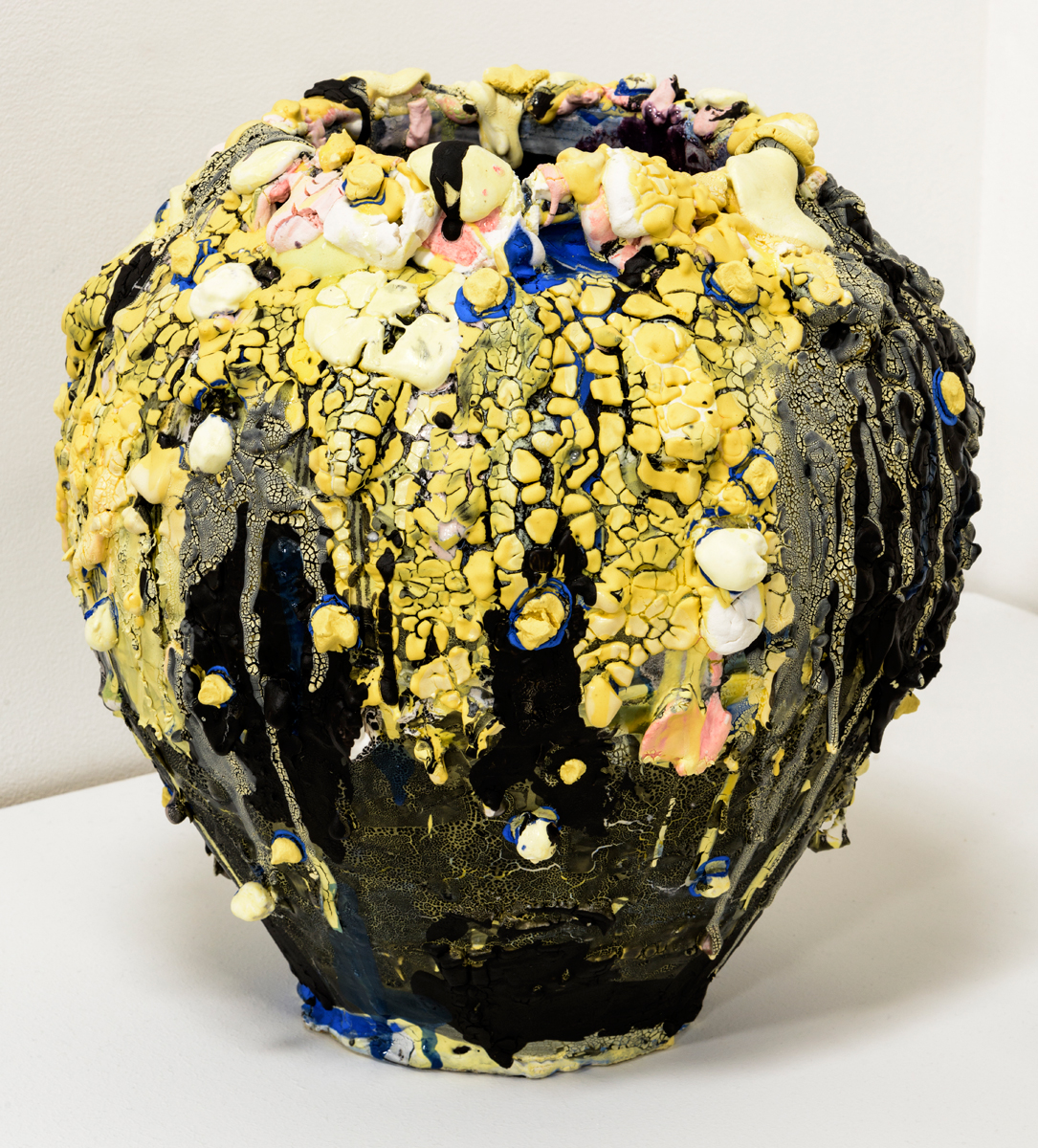 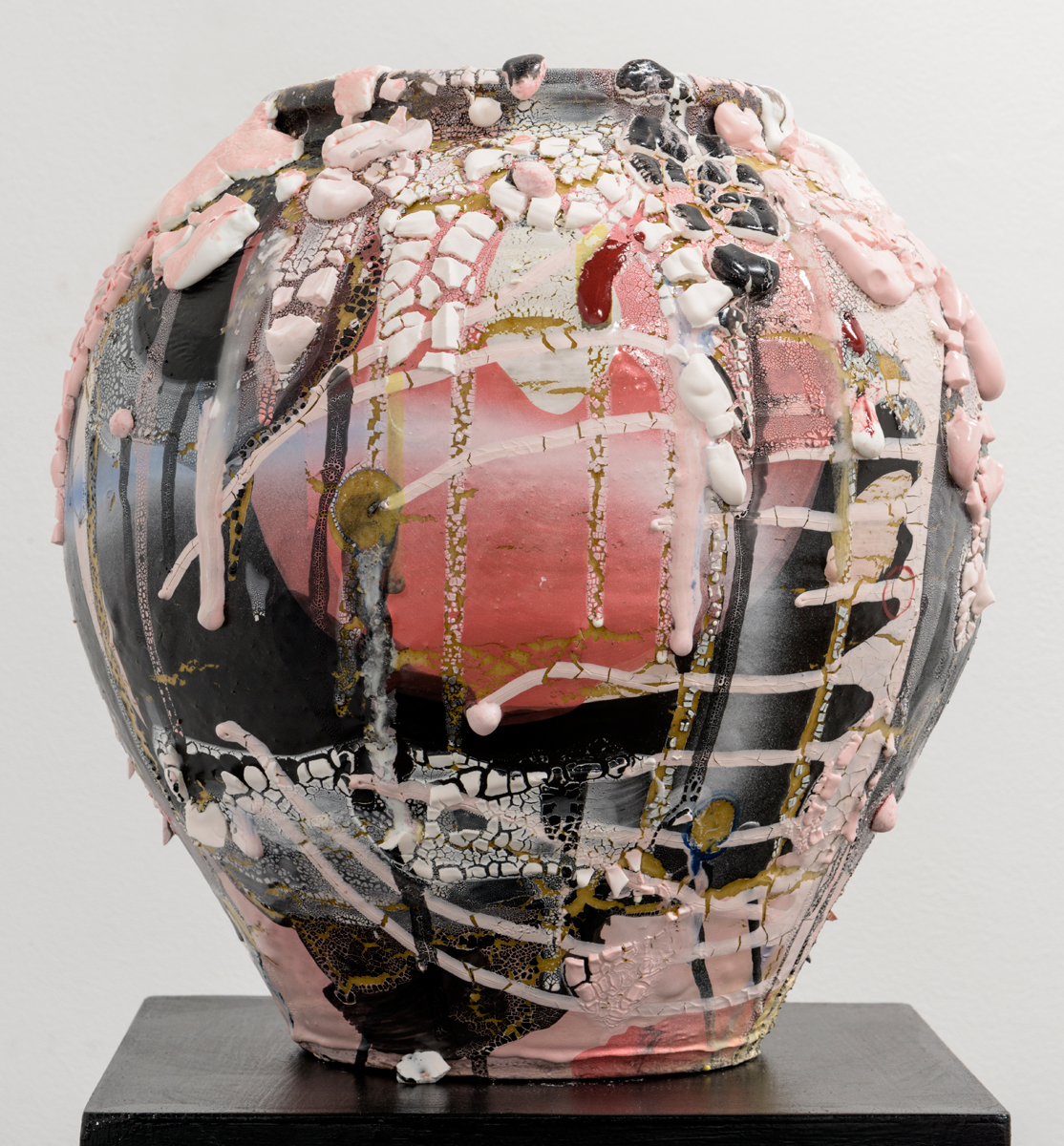 Born 1981 in Summertown, Tennessee. Lives and works in Brooklyn, New York. Tyler received his MFA from Pratt Institute in Brooklyn and BFA from Concordia University in Montreal.

Tyler’s practice consists of two complementary qualities: the gestural and the hard edge, or geometric.

The geometric paintings are redolent of both the history of abstract painting as well as the contemporary image space of the computer screen. While sensuous and tactile, with expressively applied oil paint and rich impasto, the work is also highly structured and unfolds with deliberate shifts in color schemes and forms. The work invites a playful dialogue with several dueling movements from the history of abstraction, including Minimalism, Concrete Art, and Expressionism. While Tyler’s work shows the strong influence of artists from these movements such as Josef Albers, the work is also distinctly of its time, related to digital technologies both outmoded and new. The unfolding blocks of color refer to the computer’s organization of virtual dimensional space on a flat surface.

The gestural paintings push the boundaries of confined space by allowing a certain cosmic wildness in which colors collide. Clearly influenced by Philip Guston and Cy Twombly, the work allows for drips, splotches, and textures which are meaningfully applied or randomly allowed to come through on the surface.

Tyler has had solo exhibitions at Denny Gallery in New York, B15 Gallery in Copenhagen and EbersMoore Gallery in Chicago. 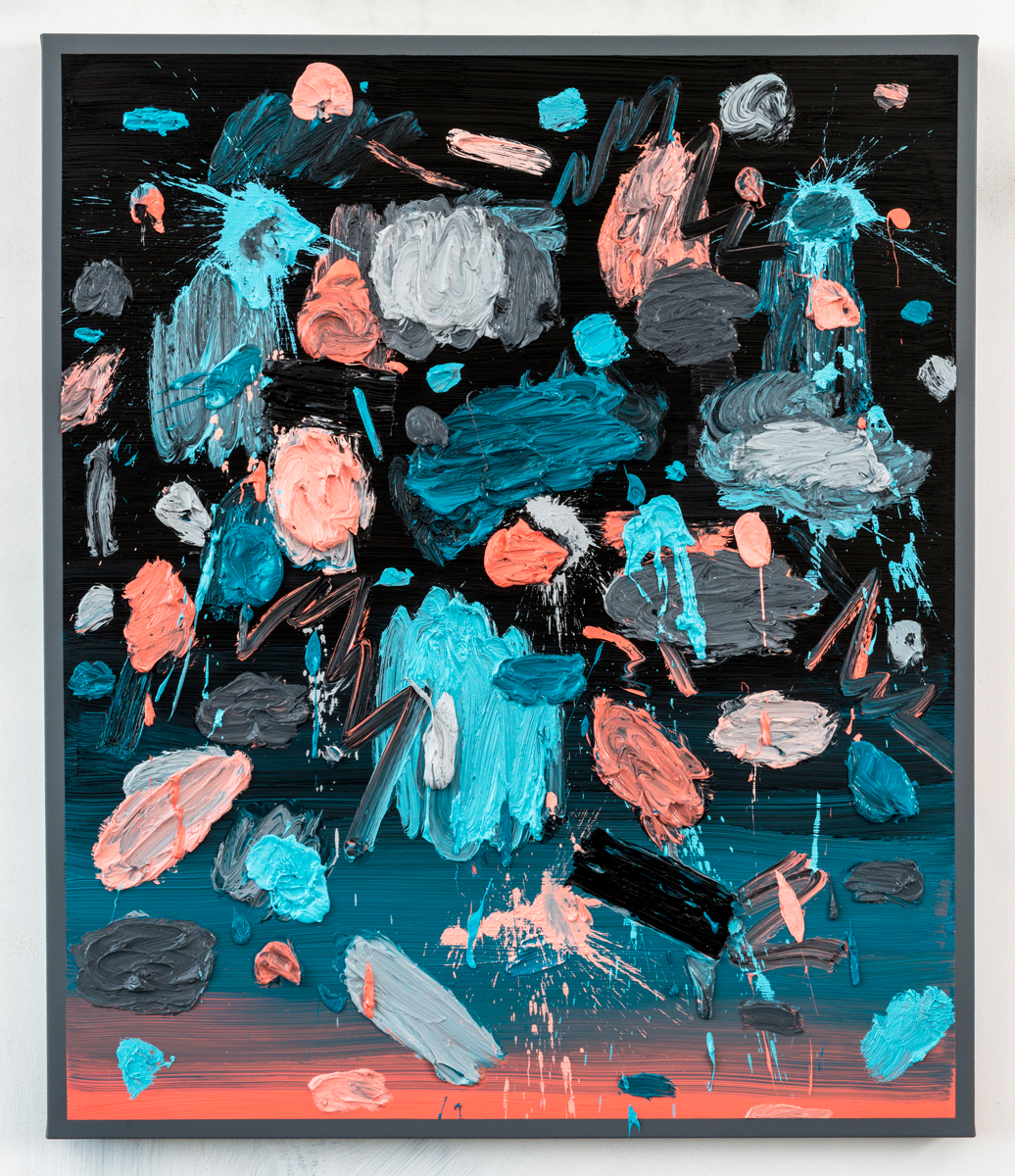 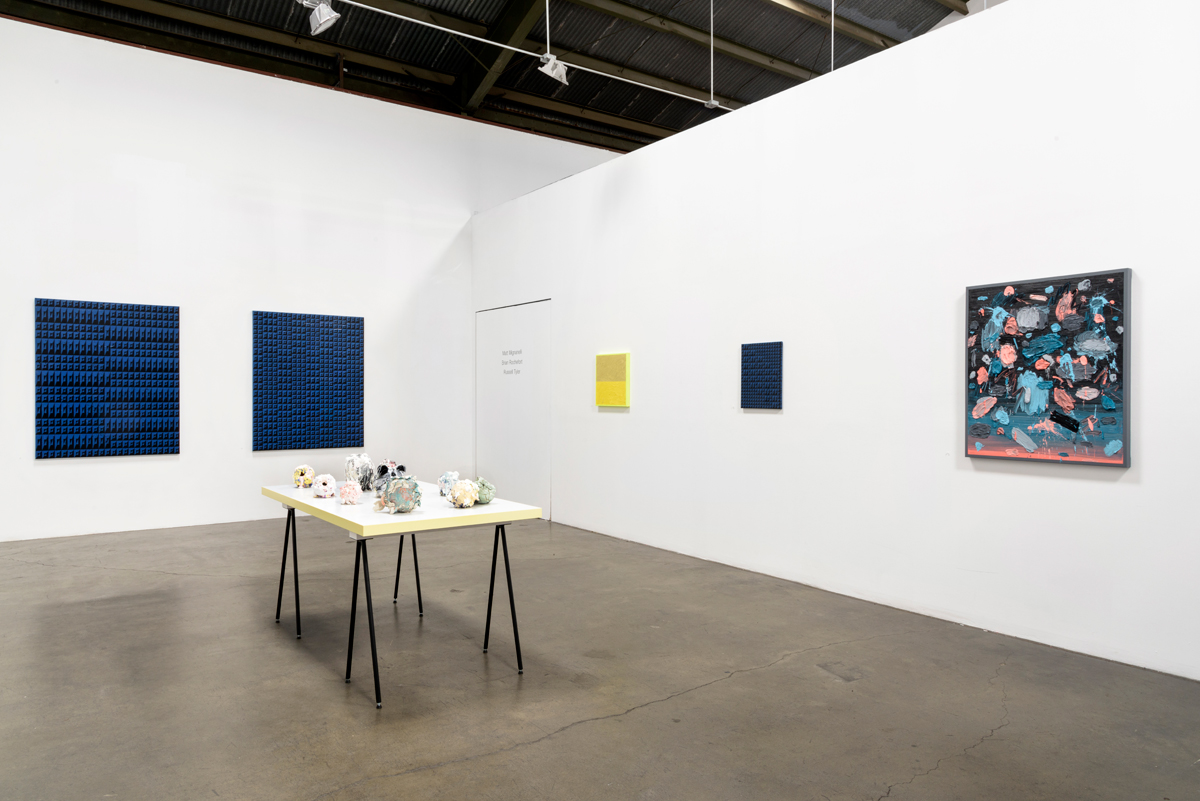