Passing through the sliding wall of Victoria Miro’s Mayfair space into their first room I am struck by the restraint of the six canvases that greet me. Rather than the mottled layering of mark and vivid colour I associate with Caivano, large areas of white primer are left bare, her palette is dominated by greys and there is a strong sense of line. The works feel stripped back in comparison to Caivano’s previous output – it is as if she has stopped painting earlier in her normal process. Yet in this moderation there is a sense that the overall time taken to complete the works is comparable – time going into thought rather than action. Questions about the speed of making quickly connect with the experience of looking: The works have a slow but dynamic sensibility, they seem to unfold and grow as your gaze lingers over them; spaces shift, pushing forwards and pulling back, specks of colour pop out and sink away.

With Untitled (VC 230, 2014-15, acrylic and charcoal on canvas, 107 x 70cm) a structure of dark grey drawn lines over raw canvas loosely contains subtly shifting greys and dark blues in scuffs and dry dragged strokes or wet pools seeping into each other. In the top right a seemingly absent minded dash of yellow thinly courses its way from the edge to diffuse itself into a pool of dark-blue: a tiny moment stealing the limelight from the rest of the painting. Of similar importance, at the top-centre an area of grey over-painting is gently permeated by the vermillion it deletes. The slightly different finish of this grey after thought from the rest of the work creates difficulty in the work, its additional sheen upsetting the overall harmony and cancelling the pleasantness of the colour bleeds. The jarring anxiety created by this difficulty pushes the piece into an active, stirring, emotive realm. 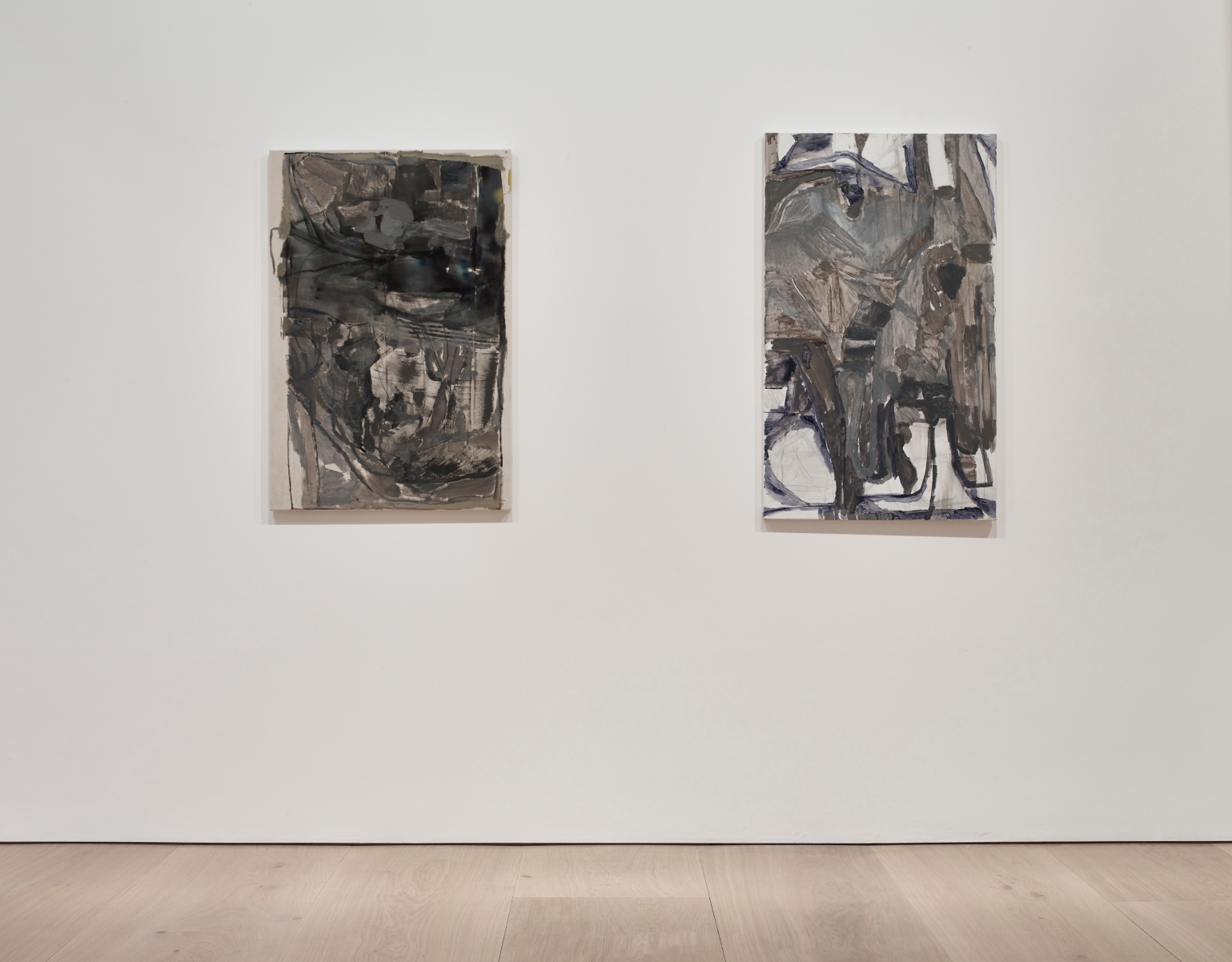 The areas left bare in these recent works make Caivano’s composition feel less ‘all-over’ than in earlier work and there is an engaging range of approaches. Large gaps of bare white primer in Untitled, (VC 282, 2015, oil on canvas, 71 x 35 cm) provide space for the eye to flow over its surface, landing on scribbled lines, dappled marks and thin washes that together create a loose landscape-esque structure. Untitled, (VC 288, 2015, oil on canvas, 180cm x 59.5 cm) instead sucks us through a tunnel of curved grey and blue lines into the painting’s more distant core of primer and smaller calligraphic marks. Untitled (VC 284, 2015, oil on canvas, 160.2 x 120.3 cm) is comprised of a loose yet energetic pencil outline under a smattering of darker grey blots interwoven with groups of angled grey striations. Reminiscent of both a close up of the grain of marble and an areal view of the pitched roofs of tight-knit terraced houses, it compresses space allowing little for the eye to rest upon.

The 6 new paintings in the main room aren’t ‘nice’ paintings, they are gritty, initially feeling skeletal and barren – deliberately buckled corners and the occasional glimpse of the wooden stretcher bar confirm that Caivano is certainly not looking for ‘pretty’. However it is their rough difficulty that provides the base of their power, allowing a careful crux: largely pale colouration in combination with raw composition and physical handling may initially feel subdued and awkward, yet this sensation shifts, offset by the intimate quality of the marks, the subtlety and finesse of individual moments. The paintings take hold and pull us into a surprising, active experience that gives them genuine longevity.

The opening of this exhibition coincided with the publication by the Renaissance Society of Varda Caivano: The Density of the Actions, with contributions by Solveig Øvstebø, Barry Schwabsky, Peter St John, Paula van den Bosch and Terry R. Myers. It is available from the gallery. 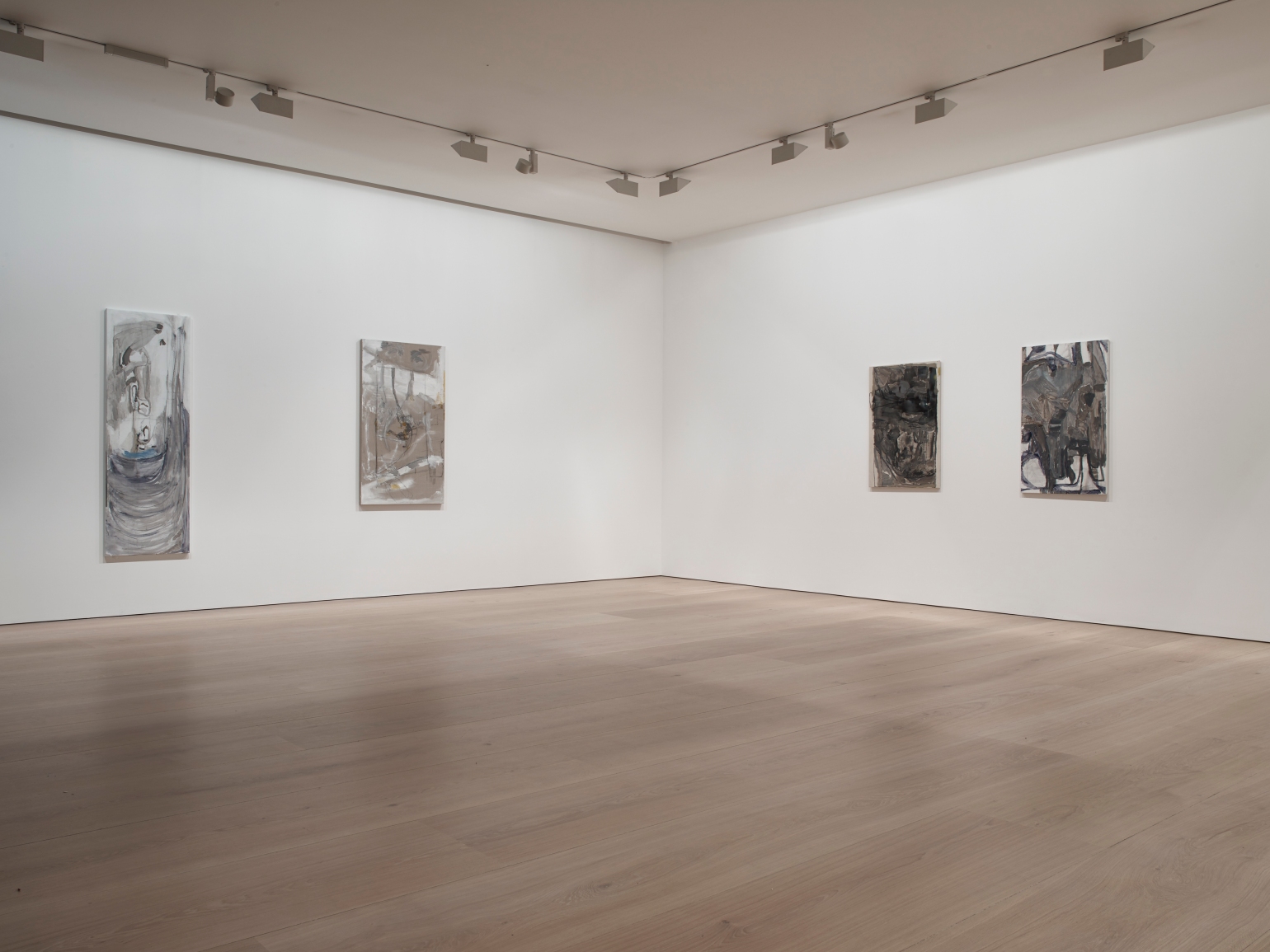