Jamie Sneider is a performer, former actress, painter, sculptor and many other things. Yet principally she is an artist. The complexity of her artistic personality captured my attention and inspired me to ask her to have the following conversation about her life, process and practice.

Vincenzo Della Corte:  I would like to begin our conversation very spontaneously, not immediately talking about your practice but certainly referring to it. Talking about your forthcoming trip to Puglia and Campania, you mentioned, with a certain fascination, things like olive groves, lemon trees and the countryside. It seems you are particularly fascinated by nature. Does this fascination somehow originate within your practice?

Jamie Sneider: I think the origin began when I was really young, a sort of disassociating about nature and its escapist qualities, probably ignited by TV shows like Little House on the Prairie and cowboy movies. I was really excited about land and materials. The dyes are very much about nature and the relationship to women’s work and women’s medicine. I use a lot of traditional dyeing materials in the paintings like lemons, cherries, wine, urine, squid ink. With my research and work on Puritan women and witches, it certainly goes back to that fascination. I had a show at NEOCHROME in Turin earlier this year, and while traveling around Italy after, Puglia was characterized as a land of poor peasants, almost dissected by class and trade, living off the land. I thought of Agnès Varda’s first film, La Pointe Courte about a small fishing village in France – that world is very attractive to me for a list of reasons. (Also see film, The Turin Horse.)

VDC: Giorgio de Chirico used to say that the artist must not deal with the concept of “originality” but with one’s own origins. He meant to underline the importance of where an artist comes from, one’s roots, the anthropological factor as it were. How important are your “origins” in relation to your work and how – if at all – does the concept of the memorial factor into your practice?

JS: Memorial is the undercurrent in much of the work, a sort of voicing something that happened using a symbolic artistic language. I am influenced by many artists who use memorial in their work – from Arte Povera, to Charlotte Posenenske and Joseph Beuys. The materials have an inherent association and power on an almost mythological timeless sense; a reductive time-capsule of what is left after an experience.

VDC: You compare your conceptual process to that of a “performative journalist”. Could you elaborate on this idea?

JS: Much of the dyed paintings came from a character of a Salem witch, a Puritan woman, created in grad school. It was a way to approach a specific dialogue about women’s history, and also a way to approach painting. I see myself as a documentarian utilizing various mediums as evidence. Collections, often displayed institutionally, create a character breakdown, almost theatrically laying out events that happened around topics of memorial, women’s work/history and the body. To tell the story of events, like a performative journalist, using the language of art and museums to present icons of culture, as if they had never been examined.

VDC: Does the concept of the “Wunderkammer” influence your work? And how do you deal with the notion of “art as documentation”?

JS: Vitrines of collections and piles of objects are a part of my work. The collections I worked with for the dyed works include vitrines of books, tools, taxidermy and costume. I am now working with more industrial materials, and that will take a different form. I have to say that Wunderkammer can go very wrong. I think it can err on boring, too science-museum-like or illustrative. Artists such as Carol Bove or Haim Steinbach work with display and collections in a really successful and humorous way.

VDC: Your dyed paintings are made in a sort of “domestic ritual”, exploring the concept of woman as witch and themes of female domesticity.  Could you expand on this and describe your process in more detail?

JS: Some of the paintings are made by soaking the canvas in dyes for a long time, while others are created in an old cauldron, tracing back to semiotic roots of the history of witchcraft, not only in compositional terms but also and above all in the choice of the materials that are added to the brew of colors: urine, wine, lemons, foods, squid ink, bleach, coffee, tea. Much of the work began in the kitchen, the laundromat, and other domestic labor.

VDC: You define your time in Bushwick as being composed of “long hard days”. And when thinking about the complexity of your practice it seems you have quite a methodic, meticulous way of working, not really based on casual inspiration. Is “handcraft” or the presence of the artist’s hand a crucial idea in your work?

JS: I’ve found that it often takes methodical work to have casual inspiration. A few months ago I wasn’t feeling well and was on the computer (the TV on in the background), and I found a photo of a stainless steel medical hamper, which echoed Eileen Gray’s side table. That was the key to the new work, the center of the web, where all sorts of research and experiments came together.
There’s a great lesson I learned from doing theater: to forget everything you know before going on stage. You can’t go over your character just before you go on: I am Lucy from Idaho, I am married, I like pizza, and my boyfriend just broke up with me. That’s kind of a disaster. I like the idea that I’ve done the work, and now I have to throw it away. There are bigger forces working in the studio, and connections I couldn’t make with my logical self. That’s when the best work happens, in the moment.
The idea that the work is handmade is a huge aspect of the paintings, and in the handmade frames, but it’s usually shown in contrast to perfection – a vitrine, a stainless steel armature. I like the tension of the mess and the clean; the body and the antiseptic.

VDC: You were an undergraduate at NYU’s Tisch School of Arts for experimental performance, and worked in sculpture. Then you changed into Fine Arts for grad school. This might sound ridiculous, but I sometimes feel that certain artists still think and act as though there were still a separation between artistic disciplines. How important is it for you to know or understand so many varied aspects of the arts and how does having such a complex background influence your decision making?

JS: The art world has a rich history of artists who worked in different mediums. Of course, the  history of happenings and how many iconic artists came out of that experimental theater. Claes Oldenburg who ran a theater and created soft sculptures as part of the performance. Rauschenberg, Schneemann, Yves Klein, Beuys — the list of artists is tremendous. A central ideological component to Bauhaus was an immersion in all artistic disciplines: theater, music, architecture, textiles. I think the transition into fine arts in grad school was very natural, and I grew up with a mother who was an abstract expressionist and my sister who is an artist.

VDC: How important are an artist’s academic studies? Is art something that one can “learn”?

JS: My work is so tied to research, that an academic focus is inseparable from the work. There are always references and history in art-making. Sometimes I think of the studio as a lab, and once I’m done answering a series of questions, I need to form new ones and that’s based on going back to research and study.

VDC: I have read about your Jewish Calendar Project. Would you be willing to discuss the scope of that piece?

JS: The calendar was born out of using the Internet as a performative space, and complete insanity.
The project was very much about a particular moment in time when blogs were a way for the populus to disseminate information and photos for immediate publication.

I’m going to give you a list of circumstances:

I think showing the calendar in the context of the Zach Feuer/Untitled show Jew York contextualized it in the perfect platform.

VDC: To what extent does your practice relate to the internet?

JS: At this moment, it is used for research, stock images, fabrication and eBay. I am working now with industrial manufacturers and that is all done online. I also communicate with artists all over the world, and of course on this trip to arrange studio visits and conversations. There are moments in the colorful paintings that have a digital Photoshop reference. I have a network of seamstresses who home-spin the cotton I use for my aprons and other stuff. I email Vicki in Idaho when I need an apron made. I like that. I sometimes joke that I’m a pre-pre-Internet artist, as I’m about to go to a residency in a medieval town of only 800 people.

VDC: Could you tell me about the book you are working on and about your upcoming projects?

JS: I am developing a series of work to show in the upcoming year on memorial, the body, and the Bauhaus aesthetic and philosophical influence on industrial medical design. A book accompanies the work.
The works are skeletons/armatures of an experience. Pared down, grey/black/white versions. I wanted to make work about loss in a way that is distilled and open.
Grief often is language-less and I’ve gone through a series of experiments to find work that makes sense. I thought not only of the loss of a person, but the loss of the still living, and what that indeterminate/limbo-like phase looks like; a sort of waiting room. I started think about architecture, abstract expressionism. Even though the paintings or sculptures have allusions to medical, industrial or sheets, there is still an attraction to minimalism, and beauty of the objects. An almost elevated perception

Jamie Sneider was born in 1976 in Boston, lives and works in Brooklyn, NY. 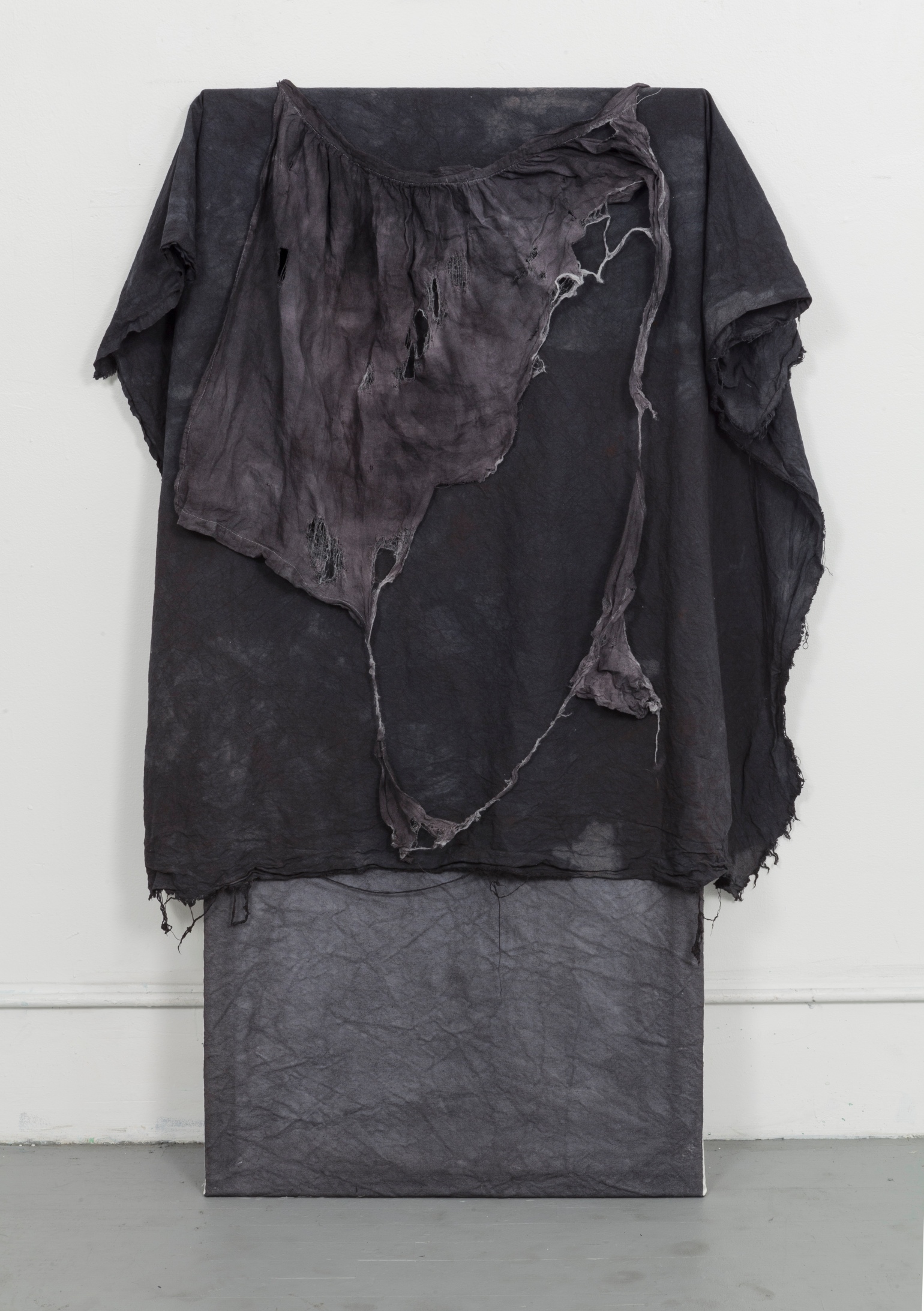