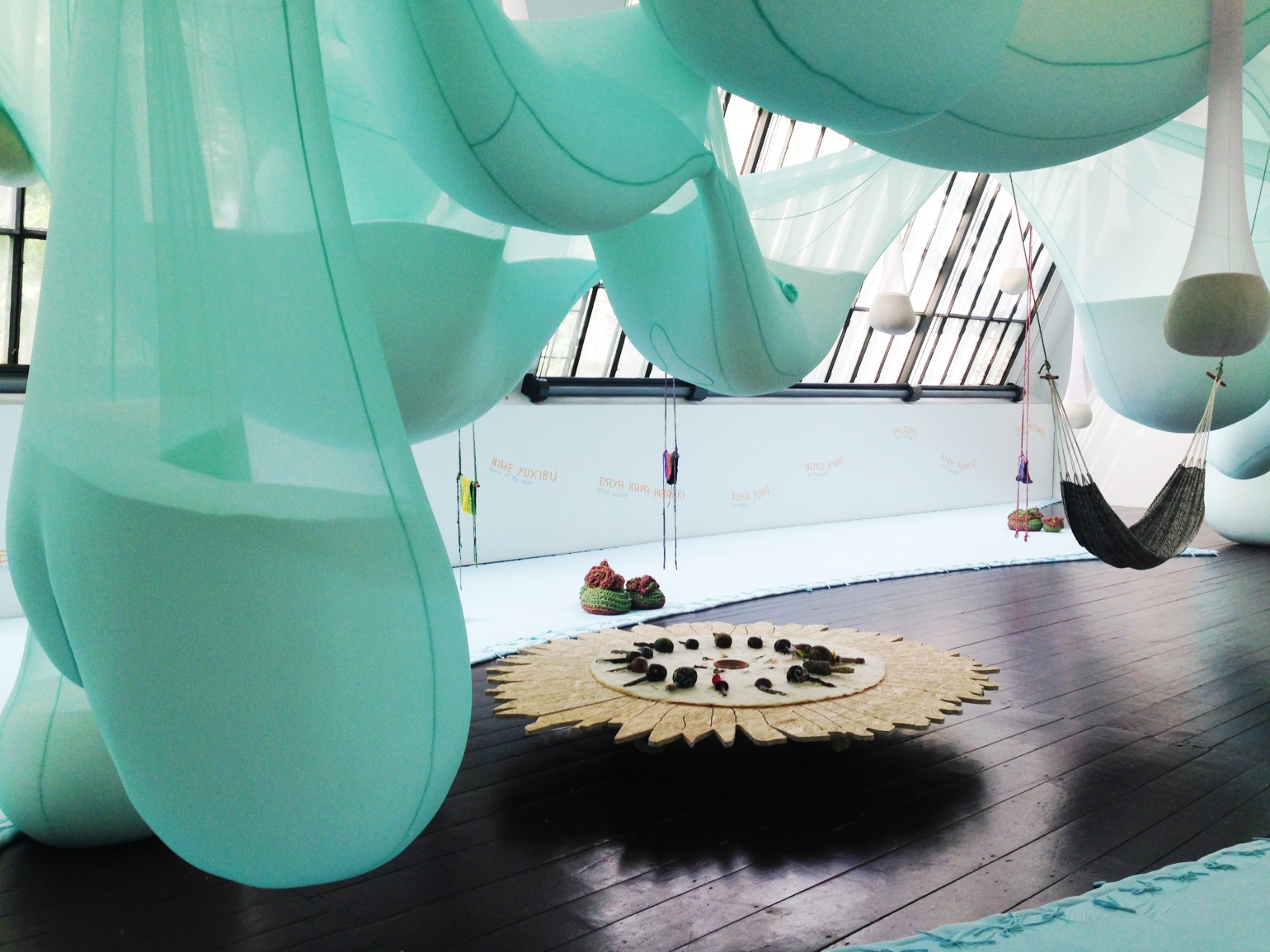 “We are not primitive, we are contemporary because we are also living, we are also thinking”. With this statement one of the Pajés, the Amerindian artists and spiritual healers of the Huni Kuin people, began his speech, which together with Ernesto Neto brought to life Sacred Secret, inaugurated at TBA 21 on June 25th.

This exhibition has a lot of material that is thematically poetic and often inspirational that makes one think about all the research that goes into Ernesto Neto’s work. 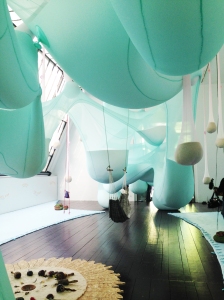 The way he intervenes in space is unique, even if the word “intervenes” is not the right one, since he offers a possibility rather than an authoritative statement through his interventions. He aims to remove every separation: “body landscape” is indeed the continuum between the body and the landscape. The three rooms of this exhibition are perfect examples of the concept of “continuum”.

A first room, let’s say the most recognizable of Neto’s work, contains his typical installations: concepts like “gravity”, “nothingness”, and the “void or emptiness” are investigated with his typical mastery.

The duality of heaviness and lightness are perfectly balanced. One would expect different materials but seen from closer they are surprisingly light. These “entities”, which I would not define as sculptures, are made of foil containing polystyrene. These slippery bodies falling from the ceiling create an interesting dialogue with the tribal writing and signs on the wall. Being in this room we see all this, and the room is our landscape, but if we go outside or in the second room, we will see in this room just a shape – a type of figure. The same when Gagarin went into outer space for the first time. Neto mentioned this example in an interview: it was the first time we could see the earth just as as a shape, a figure, and not anymore as a landscape.

The third room is the room where one goes “back to reality”. Not expressing the magical attitude of the first two rooms, in this room the viewer, often an essential part of Neto’s projects, can lay on one of the hammocks and enjoy a comfortable atmosphere. Around the room one sees drawings, photos and a book titled: UNA ISI KAYAWA, BOOK OF HEALING by the Huni Kui people of the Jordao River.

The second room, essentially a huge tent, is where everybody is reunited. This should be a press conference but it is something else. We all are seated in more or less a circle and on another row sits Ernesto Neto with the Pajés. It looks like a ritual. Ernesto asks a guy to diffuse a certain herb. The man lights a small thing and it begins to emit something. It smells like a mix between incense and mint. The atmosphere is very concentrated. The feeling of the event is mystical – and Neto begins talking. 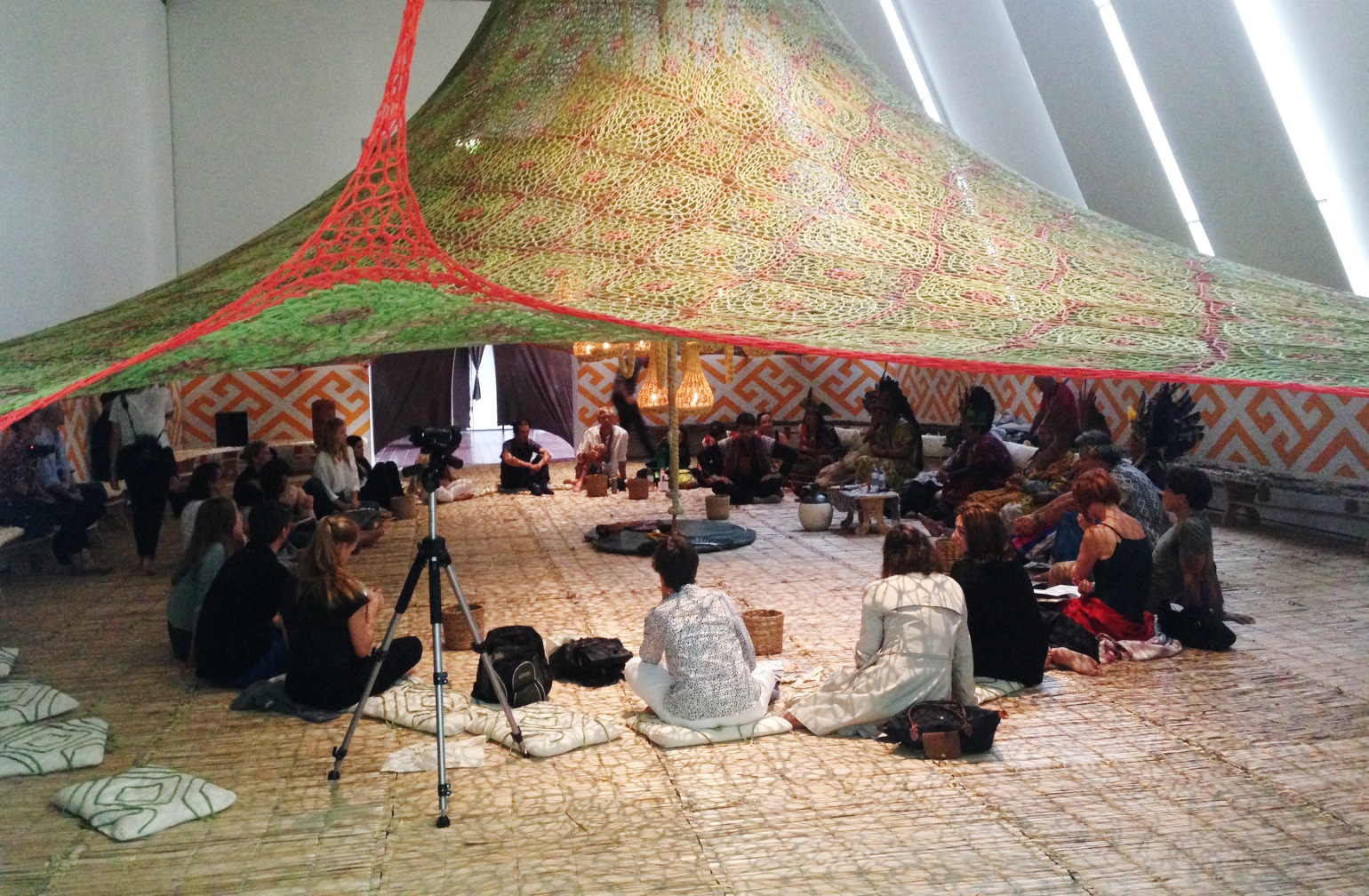 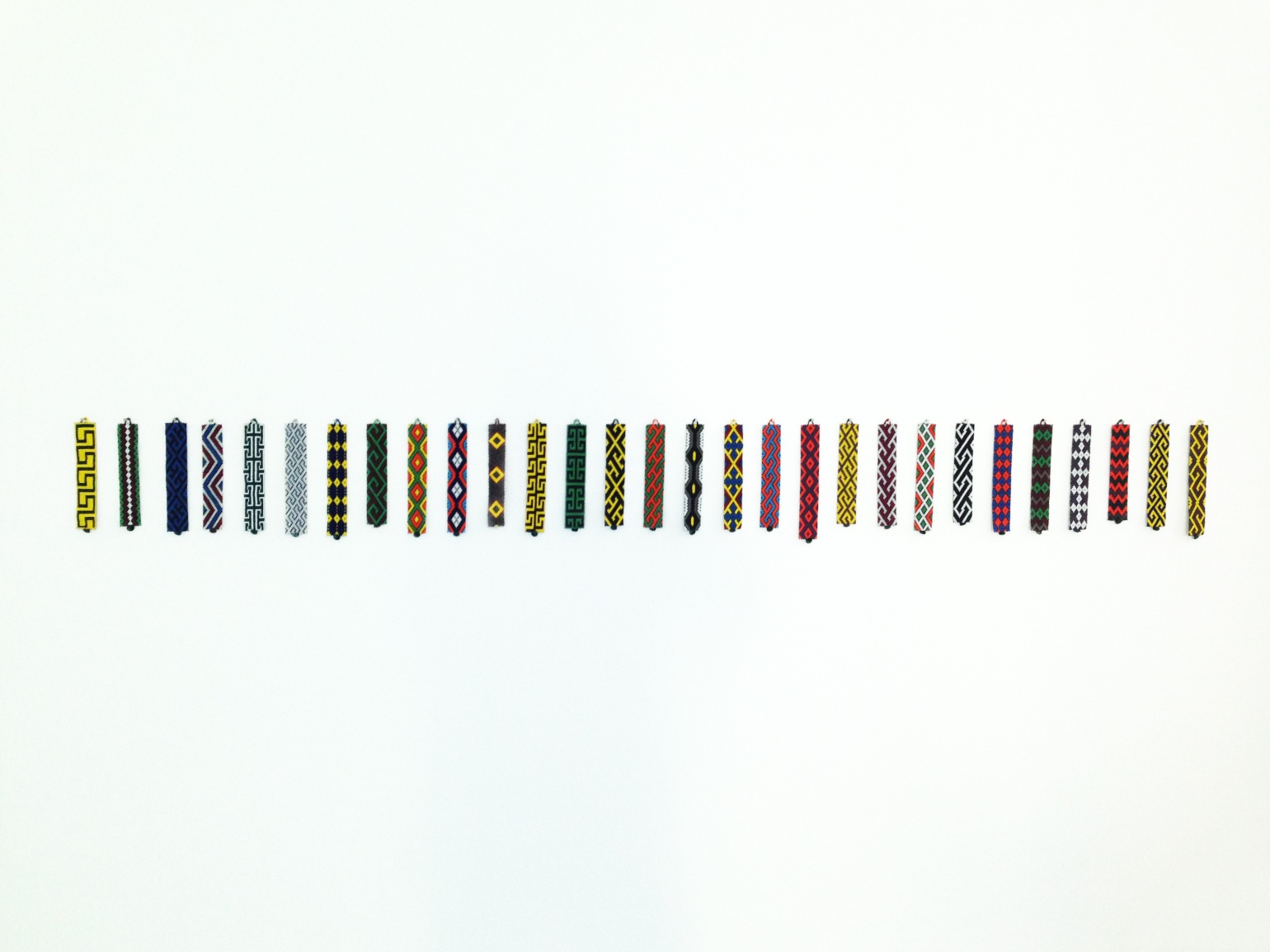 “…All my work, all this nature…came together. I couldn’t believe what was going on, it was so much a revelation for me, it is something difficult to explain because it is another dimension…we can only see this dimension when we get inside of it.” The artist calms his voice, almost whispering, and goes further. “And then, I began to sing, they were already singing (…) and suddenly a guy was laying down on the table, and he began to sing from the table. So we were in the sacred ring, in front of the sacred fire, with sacred nature, stars and animals all around us, and this singing began to come from outside of it as a blessing that was flying around and the spirits dancing around it, (…) And it was another planet, another sun, another spirit… (…)”

Ernesto Neto closes his eyes and, with a band with tribal motives on his head, he began moving his right hand, describing his experience in the middle of the sacred forest. His magic face, his magic hands… I am enchanted. He is a shaman. 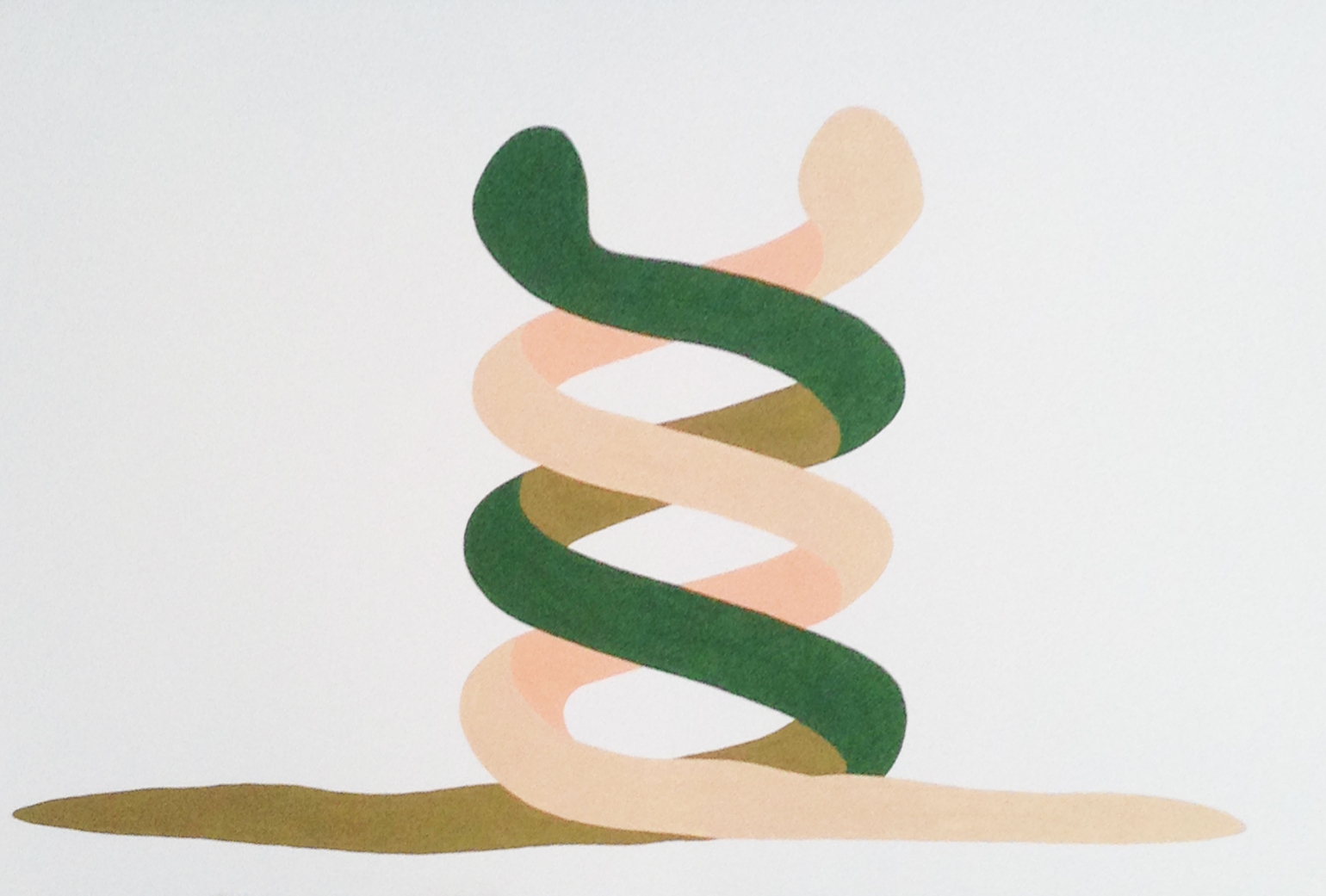 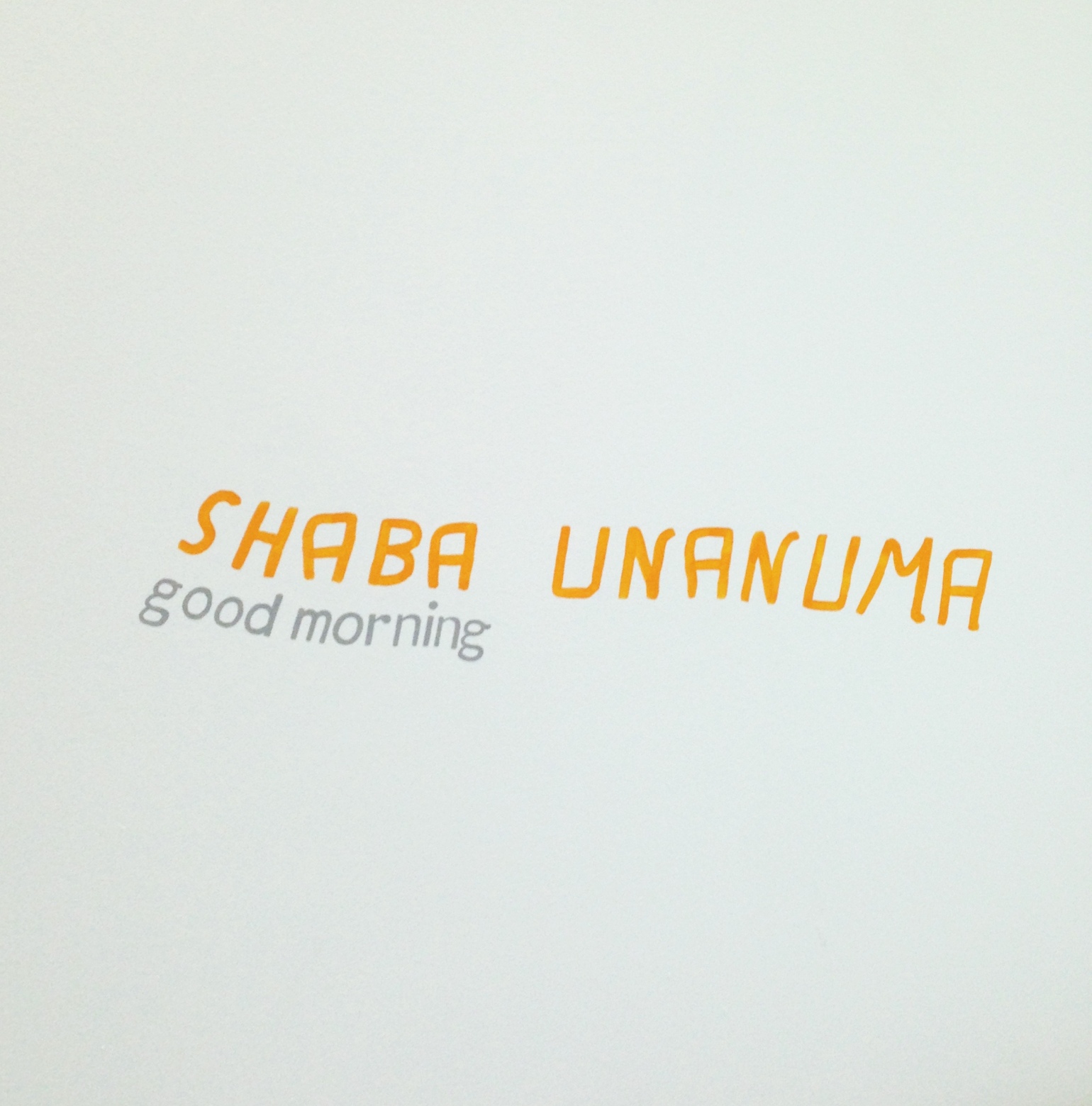 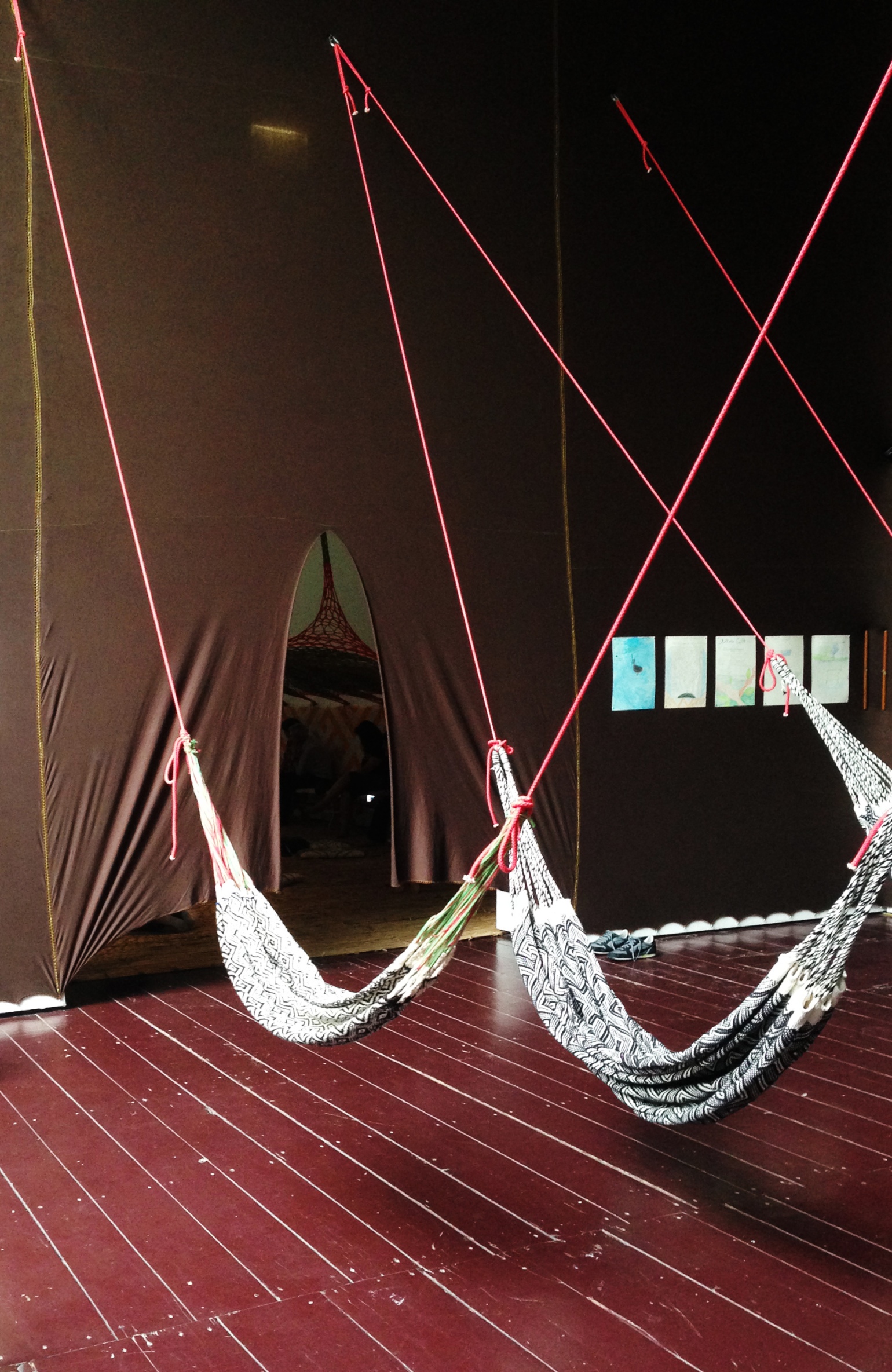 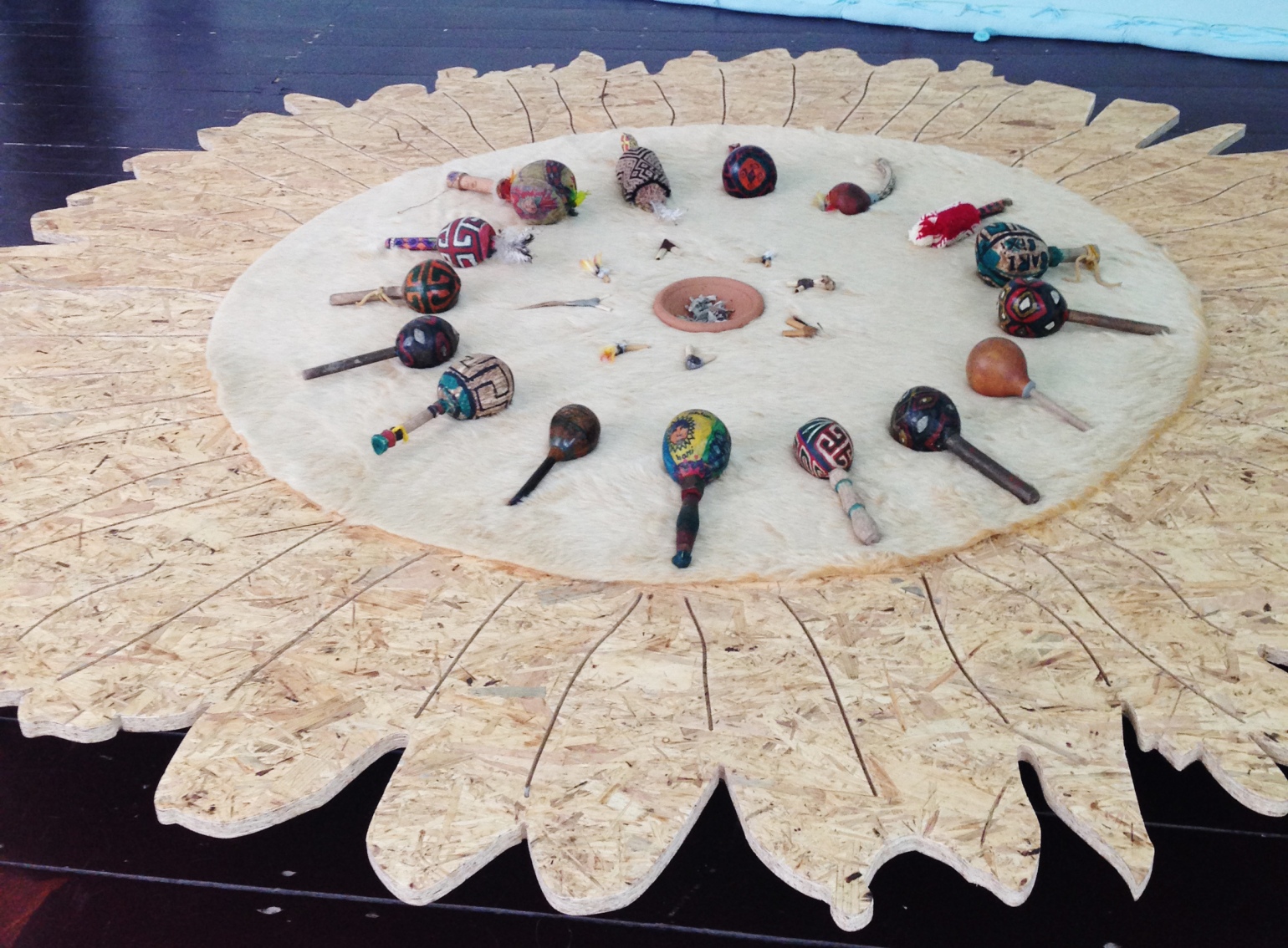 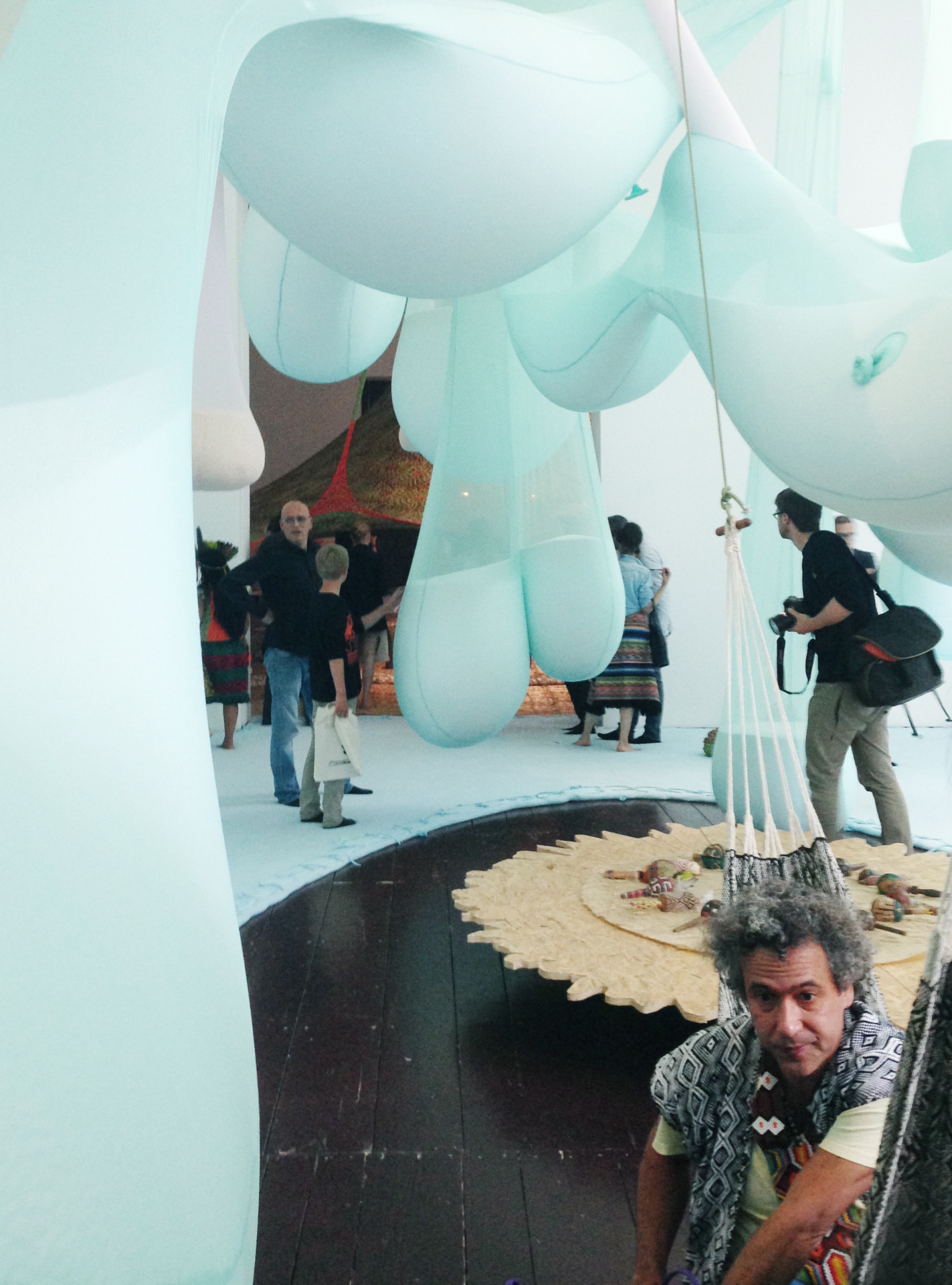