Eloise Ghioni: In Fatal Dad, you’ve introduced a new element in the composition of the work: atmosphere. How and when did you develop the idea for interacting with the gallery space?

Brian Kokoska: It’s sort of something I’ve been playing with for the past couple of years. But it’s developed into a more integral part of my work recently. I did a show with East Hampton Shed in 2013 which was the first time I altered the floor color. Then I did a red show called Blood Reply at Ohmydays in Singapore last year. Since then I’ve been working on projects that alter the entire gallery space in different shades of one color.

EG: The fetish is considered an object of worship in primitive religions and is worshiped as a deity.  What kind of significance does it assume in your work?

BK: It’s something I think about a lot. I like the idea of creating a show that fetishizes the objects in a larger environment that feels intentional. I think the whole dynamic changes when you play around with lighting, flooring and colors in a gallery space, even if it’s subtle. I try to install my work in a way where it becomes more like a monument rather than just a painting or installation. The head sculpture installations that I pair with background paintings are very symmetrical and reference religious monuments, tombstones or mausoleums.

EG: The strength of your paintings with their archaic and animist tendencies seem to blend seamlessly with the ethereal atmosphere of space, both coexist and create a perfect union.  Would you be comfortable if one were to describe your approach as poetic or does your intent go beyond simple aesthetic allusion?

BK: Both in terms of the way I process text and images I think I lean more towards the poetic side. In that sense I would say I’m a formalist to a certain extent. But honestly I just like working with restrictions. So I use a lot of recurring imagery to help build compositions in my work and also when I install a show in a space. There is so much potential in working with repetition. So it’s about an aesthetic allusion for sure, but my work borrows from a lot of different sources. Most of the references are deeply personal but are routed in cult sensibilities and concepts relevant to the post-human “face” such as uncanny valley, for example.

EG: I am fascinated by the chromatic liquidness of your works. Purple, lilac, black. They are colors yet they seem not be pure colors.  Purple is the last color that we are able to recognize in the electromagnetic spectrum and black is the sum of all the colors together or absence of the same colors that make up light.  Is there a particular reason that led you to choose these colors?

BK: I love purple because it’s one of the hardest colors to interpret. It’s sort of a pretend color. It’s non-spectral and I think everybody views it differently, especially when it’s abundant and you’re all of a sudden surrounded by it. When you see purple tones against violet tones your eyes want to differentiate the two by increasing the amount of red hue in one and blue in the other. The optical effect is really special in this way. Also when people take unedited iPhone pics it just looks totally fucked up which I love.
I introduced severe black tones into some of the works to sort of absorb that feeling. And Zack’s sculptures were intentionally chosen because they are entirely achromic: shades of black, grey and white. His sculptures stand out in a strange way and feel very light and airy against the baby purple and violet tones. I was also drawn to his use of real spiderwebs in his Baby Nils sculpture.

EG: There are recurring symbols in your paintings such as numbers, especially the number 3, as well as stars / hearts, secretions and cobwebs – what significance do they have? And how do they relate and interact with each other?

BK: I use a lot of recurring symbols and gestures to build and decorate compositions of a “face”. They are usually obsessive numbers and iconography that are spontaneous or that I think a lot about and therefore end up in the work in different forms. The number 3 is a perfect division of 6 which is one of the characters I like to use in repetition. And I use the number 13 a lot. They are usually superstitious in that they are either lucky or unlucky to me. The numbers you see the most often are the lucky ones.
As far as other symbols go I tend to use really basic iconography that is easily recognizable and approachable. I like that these symbols, just like a face, can be interpreted in so many different ways so their relationship to viewers varies tremendously.

EG: You have exhibited a curious sculpture with two gloves which have two dental casts placed on the ends.  I’m wondering if you’d be willing to elaborate on the piece?

BK: It’s a new sculpture that I made when I went to Milan for the show. The dental molds were my upper and lower teeth when I was 19 years old 5 months. My mom gave them to me last time I visited her. I was reading a lot about teeth dreams and what they mean in different cultures. I like that the sculpture is sort of a self-portrait of me in my final teenage year. There’s something really tragic and beautiful about it.

EG: How do you think your work will evolve from here?

Brian Kokoska was Born in Vancouver 1988, is living and working in New York city. 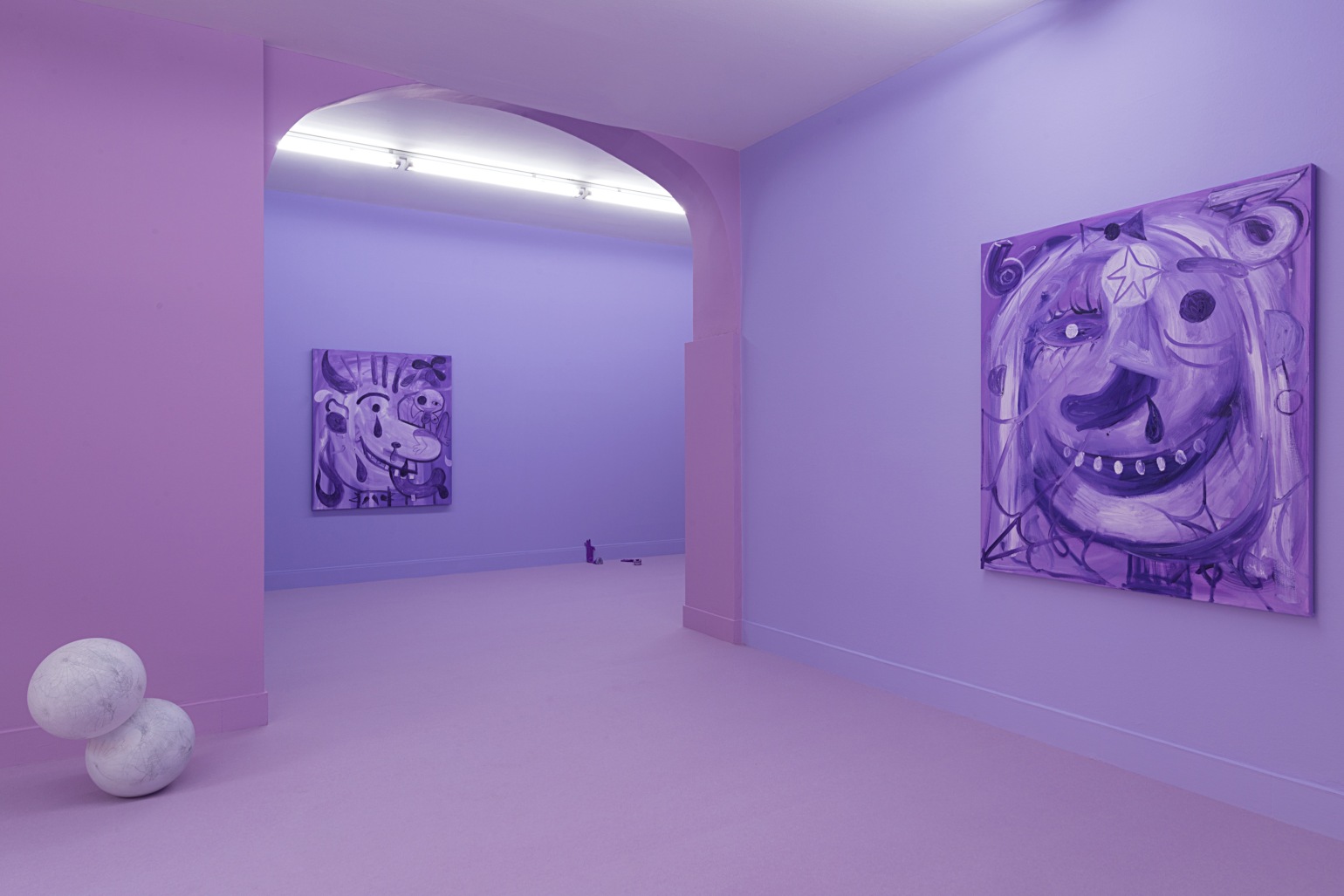