Technical: “As defined by IUPAC, a rare earth element (REE) or rare earth metal is one of a set of seventeen chemical elements in the periodic table, specifically the fifteen lanthanides, as well as scandium and yttrium.”

Economical: “Rare earth elements are not exchange-traded in the same way that precious (for instance, gold and silver) or non-ferrous metals (such as nickel, tin, copper, and aluminium) are. Instead they are sold on the private market, which makes their prices difficult to monitor and track. The 17 elements are not usually sold in their pure form, but instead are distributed in mixtures of varying purity, e.g. “Neodymium metal ≥ 99%”. As such, pricing can vary based on the quantity and quality required by the end user’s application.”(www.wikipedia.org)

Almost every modern technology is made with Rare Earth Elements: tablets and laptops, LCD screens, mobile phones, CDs and DVDs, LED light bulbs etc. There are 17 and this exhibition offers 17 different artistic positions, one for each rare earth element. Despite the very technical premise, the themes – sometimes hidden – of the exhibition are complex and various: tribal, new age, danger, primordial era, knowledge, extrasensory perception, chemistry, technology as well as life, death, eternity and mystery.
Indeed, is there anything more mysterious than a stone? Probably not. And Katie Paterson’s work is in fact a stone, Campo del Cielo, Field of Sky , 2012.
The man sitting on an old engine perfectly represents the work by Roger Hiorns, Untitled, 2012. Despite its technological appearance, it has an esoteric quality to it. 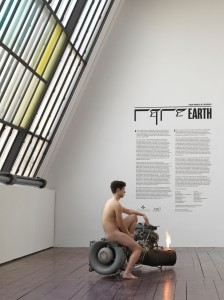 Ai Weiwei’s work Rare Towel, 2015, wonderfully inserted in the general contest of this room, reaches a clinical, perfidious result. Are these towels perhaps kindly offered to clean the dirty scene following a tribal blood ritual?  Despite their heterogeneous quality, the works in this room when viewed together are impressively focused.
The same clinically unsettling quality that characterizes Weiwei’s work can also be found in Neodymium (Energy Pangea), 2011 by Iain Ball. The tribal music, stops for a while and then immediately restarts. The overall feeling of the piece is incessant, primitive and arcane.
Julian Charrière intelligently investigates how rare earth elements are present and influence the daily operations of our digital society. He does this marvellously yet with a very classical idea. “The Third Element” , 2015 consists of colored windows juxtaposed with the ordinary windows of the room.

Ursula Mayer, with “Luminous Lining”, 2015, achieves a very interesting result. It’s not easy to homogeneously melt – in one work – primordial elements, design objects as well as technological elements. The result creates a kind of crystallized atmosphere, where an instant later the feeling might be one of surrealism.
In the center of the room is a work by Erick Beltrán, Hephaestus’ Dream, which investigates the structural mechanism of knowledge.

While the following room offers a very intriguing, spontaneous wall painting by Suzanne Treister, Rare Earth , 2014. Beside this is a sculpture by Oliver Laric titled Sun Tzu Janus, 2013, which is a work that in a certain way, but in a totally different aesthetic direction, reminds me Timur Si-Qin’s research.

“Production as a cultural, ethical, and political process” is the theme that animates Revital Cohen and Tuur Van Balen ‘s work. An object sits on a shelf and is composed almost entirely of magnetic material. As seen in some other instances in the show this work also has a primordial quality to it and appears as a counterpoint to what happens below. It is a kind of “esoteric receiver”, and could have the same function of the long bar in the huge skeleton hand in Gino De Dominicis’ monumental work “Calamita Cosmica”, 1986.
Desktop images, tv images, real life images with inserted web images, etc. Here we return to the middle age complex theme of cataloguing. A wonderful resume of the most revolutionary resume in history: the internet. This is a video by Camille Henrot, with a poetic yet questioning moment: a warm voice accompanies the short climax , a man that looks at a toucan not completely understanding what it is. After all isn’t the virtual world in reality a toucan? An instant later it will be a penguin. The R&B musical piece that accompanies this is fantastic, and if you are afraid this work will ever become ordinarily didactic at some point, don’t worry, it won’t and you’ll never get an a answer. “Grosse Fatigue”, 2013, is the jewel of this exhibition. It was all well worth the “huge effort”. 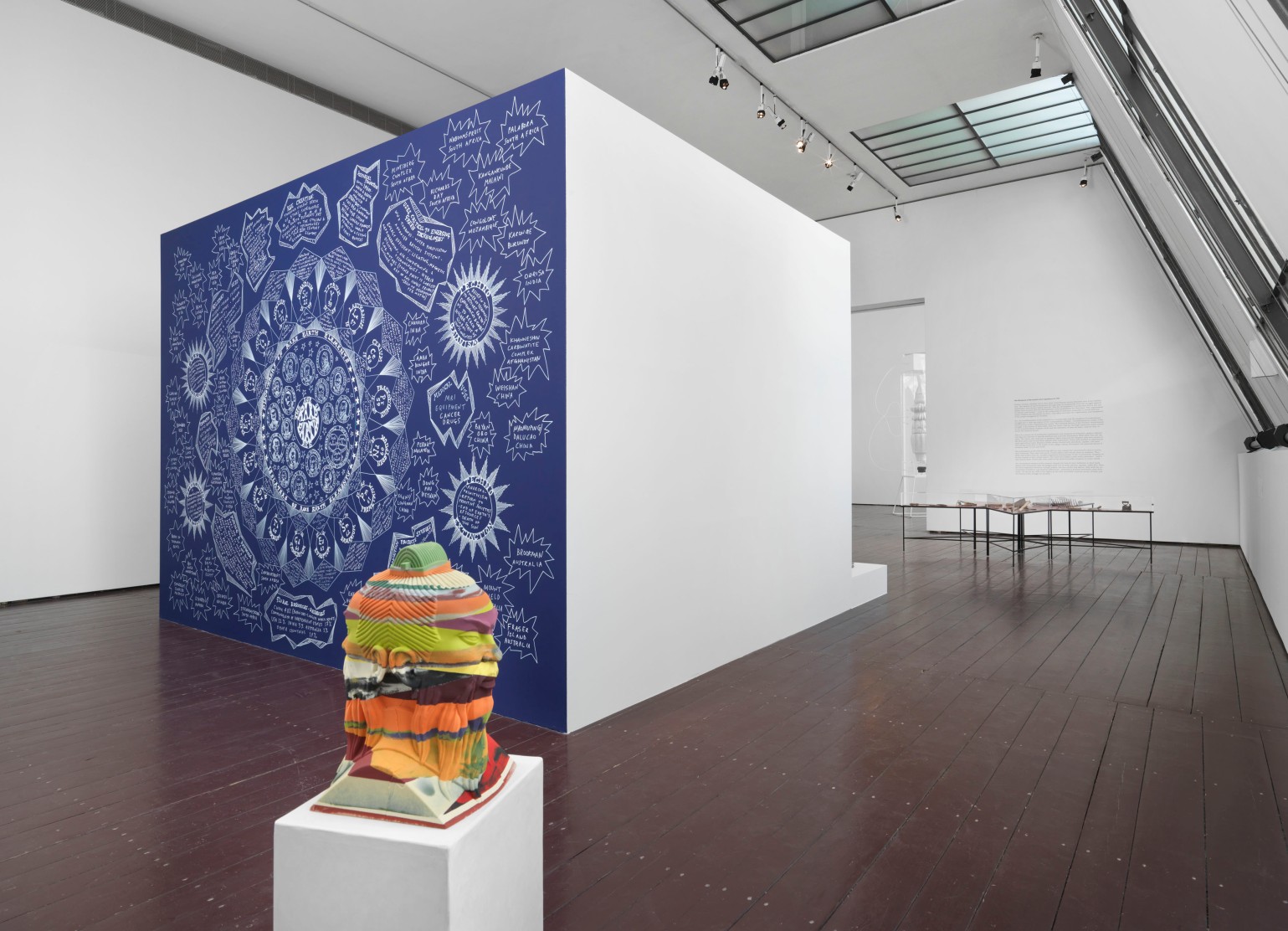