Eloise Ghioni: Three years ago, I came across two curious objects, that were for sale during the first edition of Personal Effect on Sale «a project that involves the sale of an artist’s personal property at the symbolic price of 9.99 euro». The objects in question were two small paper umbrellas, which normally are used to decorate cocktails. An extravagant object in and of itself, especially given the context, but I was so intrigued that I decided to buy them. It was only later that I found out that they were yours. Would you like to tell me about them?

Stefano Calligaro: I found these two little cocktail umbrellas one evening in my jacket pocket without knowing how they got there. And they got my thoughts all confused: China and Japan, the East, the exotic formal nature of both almond eyes and ideograms = ??!

EG: I am intrigued by the process of minimal rigor in your works, which are often so light as to be visible only through a careful reading of space or by the objects that make them up. Today, it seems that structurally your work has been enriched by formal concerns, and I sense that the conceptual approach is similar.

SC: I would like to keep a certain distance from forced things like concepts, mathematics, opinions and styles or from any explicit form of translation. I have a passion for macaronismo language and slang, the graphic fonts in the Cyrillic alphabet and subliminal perception. I also think that somehow something like Wikileaks and a curiosity for the economy and the stock market has helped me arrive where I am today. Even the act of writing gives me, in its own way, the feeling of being at the center of something constructive like, I wouldn’t know precisely how to define it, but in any case I’m talking about language: dialect, visual, formal, which is reflected in all my work. Even if I don’t think about it very much, I feel I’m talking about how we’re building up a type of slang and this produces a certain energy that must be made visible in some way.

EG: Isn’t that an approach similar to the way Marinetti structured the Futurist Manifesto in Italian? And taken up 50 years later by concrete poetry in Switzerland and 20 year after that taken up yet again by the new visual avant-garde.

SC: Marinetti wrote what we might describe as a collection of concise thoughts / beliefs and intentions through what I’d describe as the blender of provocation. Today the idea of provocation has a different meaning or we can say that the definition of subversive and provocative depends more on the public’s perception in relation to what I want to subvert rather than the explicit content of the work itself. Sure, my interest in writing, images and their value at the level of “attention grabbing” can lead to an overall “avant-garde”?? reading, but honestly I’m attracted to other things, especially the media and the fact that information arrives on my desk in such a fast way: advertising, google or wikipedia, are their “link” and the opportunity they give us to move from one subject to another by simply clicking is what interests me: connections and the perceptual zigzag: %%.
I would say the same in relation to concrete poetry, of course, it is something that I read with interest: the changing of position regarding where meaning is given significance in a text as well as its content and its constituent elements. But rather than reflecting on the rules of language, I prefer to be moved by their appearances, taking bits from here and there, mixing dialects and subjects which happens while surfing the Internet or eavesdropping on a conversation where one does not know what the subject is. What is the result of all of this? confusion = Excellent! Super! 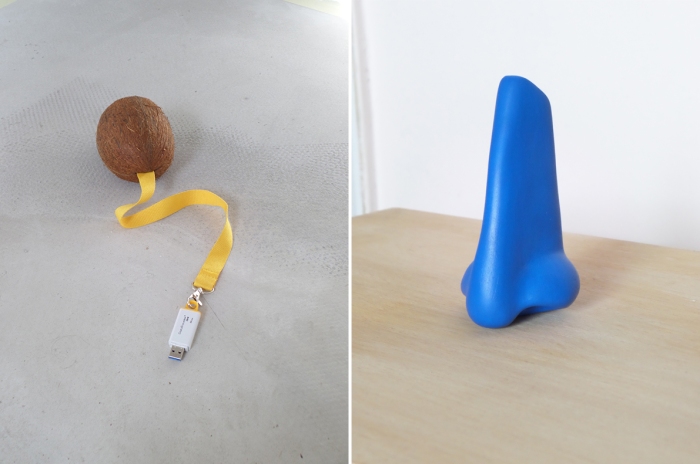 EG: Your latest works are mainly two-dimensional, do you believe that the structuring or in certain cases the synthesis of a new language is more effective when delivered through the visual composition of two-dimensions?

SC: Like I was telling you many of the things that I like have to do with two-dimensionality or I could say are at home in two-dimensions. Things like the contents of posters, computer screens, flyers and so on. The fact that all these things have a limit defined by their perimeter is definitely not a limit! Or said in another way a limit becomes a value. I like to write without using many points or commas,,,, But I wouldn’t say that I plan my choices based on two and three-dimensionality based on the idea that it limits or permits more freedom, sometimes I just feel the need to work with one dimension more than the other and to think of an object instead of a picture, but it is all spontaneous = I can not answer your question = I think the layers that make up a language are so varied and curious that simply to observe or use exclusively one would limit the language itself.

EG: Coconuts, hot dogs, avocados, small mechanical things and many other symbols; what is the common denominator between them all?

SC: Have you ever thought about what comes to your mind when I say coconut? or to where it takes you? and if I say frankfurters? avocado? banana? light bulb? ö?

EG: How do you choose the elements with which you compose your language? Is it by chance like the cocktail umbrellas or does it derive meaning from a process developed previously?

SC: It’s a mix of randomness and rational thought. It’s not up to me to decide if there is order in what I do: certainly there is order in what I do! I mean how could I do something that has an air of “anything goes” if it is ordered!
What I can tell you is that I work in a spontaneous way, the choice of a subject depends on many factors, which I don’t want to list using words. Let’s just say that I buy a pair of shoes when I really need them or when I like them so much that I just can’t resist!

EG: An open-ended question about your work and how it evolved over the years.

Stefano Calligaro was born in Cividale del Friuli in 1976, is an Italian artist living and working in Romania.